"Dissipation and Disintegration" at the Center for Land Use Interpretation (Los Angeles): 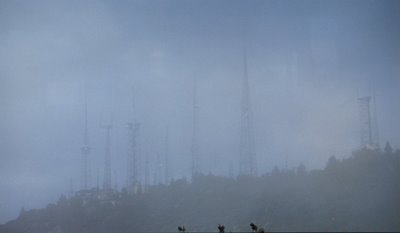 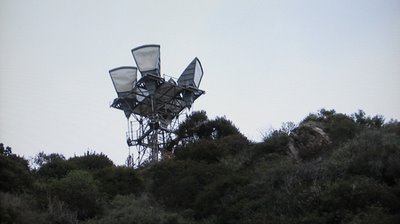 Dissipation: The antenna sites depicted here form a line along the southernmost ridges and peaks of the San Gabriels. From this elevation, more than a mile above the Los Angeles basin, and within proximity to the city, these sites allow for line-of-sight communications, and for the exposure of the maximum urban area to the electromagnetic emissions of industry, entertainment, and government. The Forest Service, which owns and manages most of the San Gabriels, has set aside twenty-seven areas in the Angeles Forest for "Designated Communications Sites." The most congested of these sites, at Mount Wilson, is one of the densest "RF jungles" in North America. Thousands of feet separate these antenna sites from the debris basins below. 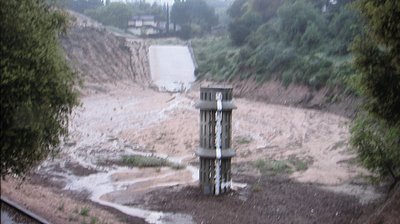 Disintegration: Debris basins can be found at the base of many of the vertiginous washes and canyons in the San Gabriels. The function of the debris basin is to separate debris, including rocks, mud and vegetation, from the storm water that flows down the mountains during the winter rainy season and thereby prevent damage to property and downstream flood control structures. A debris basin usually consists of an earthen dam, an excavated pit, and a spillway to channel water past the dam. Pipe spillways, as seen in the video, are vertical pipes with perforations to allow water to be separated from debris. Debris basins require constant maintenance--once they reach about 25% full the debris needs to be removed, trucked off, and disposed of. Due to encroaching development, disposal sites for the debris are getting further away, adding to their expense.
Posted by Cynthia Hooper
Newer Post Older Post Home