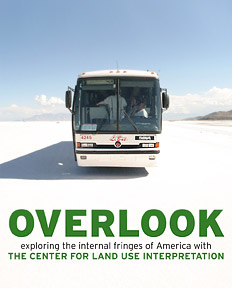 Written by the Center for Land Use Interpretation, this book reflects on how the nation's lands have been parceled out, put to use, and understood. Seeking out "the unusual and the exemplary," the CLUI serves as a kind of curator of the American landscape, a tour guide through ghost towns and show caves, past soap and shoelace factories, to open pit mines, casinos, landfills, and art installations, to the dry lakes where atomic bombs were tested and the ersatz villages where rescue workers train for toxic spills and other disasters. Sites like these rarely appear on street maps, but the Center believes that they are windows into the American psyche, landmarks that manifest the rich ambiguities of the nation's cultural history.
Posted by Cynthia Hooper
Newer Post Older Post Home