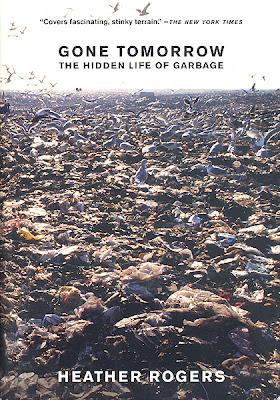 On the post-WWII economy: "The government regulated the economy, capital agreed to pay higher wages based on the greater productivity available with new manufacturing methods, and workers for their part accepted consumerism in place of political power on the job and in society as a whole."

On plastic: "As Roland Barthes noted, with plastic 'the hierarchy of substances is abolished: a single one replaces them all: the whole world can be plasticized.'"

On the "Keep America Beautiful" campaign of the 60's and 70's: "The centerpiece of this organization's strategy was its great cultural invention: litter. This category of debris existed before, but KAB masterfully transformed its political and cultural meaning to shift the terms of the garbage debate. KAB wanted to turn any stirrings of environmental awareness away from industry's massive and supertoxic destruction of the natural world, telescoping ecological disaster down to the eyesore of litter and singling out the real villain: the notorious "litterbug." Taking this tack, the group could defend disposability and obsolescence; the problem wasn't rising levels of waste, they explained, it was all those heathens who failed to put their discards in the proper place."
Posted by Cynthia Hooper
Newer Post Older Post Home