A hand-built electrical panel for a vegetable oil deodorizer: 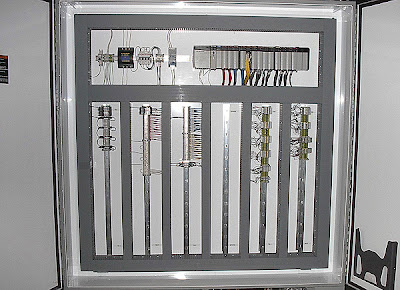 "The panel I built will control electrically-operated valves. It receives signals from sensors such as float switches (rising or falling liquid in a tank flips a switch), thermometers, etc. Logic circuits (computer chips) using custom-made software decide what to do under the current circumstances and send appropriate signals to electrically-operated valves that open and close to control the movement of liquids and gasses.

The computerized processors on the panel also receive and send signals to and from a Windows-based computer, so the plant operators can monitor and control operations. On the user interface there's an animated diagram of the processing equipment that shows which valves are open or closed, liquid levels in tanks, whether various pumps and fans are on or off, stuff moving through pipes, etc.

A vegetable oil deodorizer is a cylindrical, stainless steel tank. The tank is filled with vegetable oil, air is pumped out of the tank to form a high vacuum, and steam sent through coils of stainless steel tubing within the tank heats the oil to 464-518 F to vaporize the smelly compounds (aromatic oils, remaining free fatty acids, and traces of chemicals used in earlier refining steps) in the oil. Steam is also bubbled directly through the oil to absorb the smelly compounds, then the steam and smelly compounds are sucked away by the vacuum system."

"This one is on its side for transport": 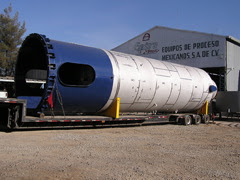